If SUVs are so popular these days, it’s largely thanks to Jeep who essentially invented the idea with its very first Willys back in 1941. And let’s not forget the Jeep Grand Wagoneer, arguably the pioneer for the entire midsize SUV segment.
But in a world where virtually all carmakers now offer some sort of SUV, or in some cases, two or even three, how can Jeep ensure its dominance? By coming out with this: the Jeep Grand Cherokee Trackhawk, or if you prefer, the fastest gasoline-powered SUV on the planet. Any further questions?

One ENGINE to SILENCE ALL ENGINES 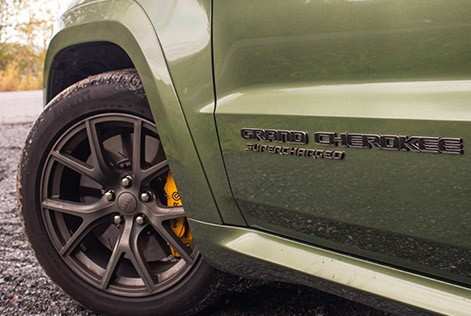 When FCA introduced the 6.2-liter supercharged HEMI V8 for the Dodge Challenger Hellcat, Mopar fans across the world knew that it was just a matter of time before it trickled down to other models. And they were right. After being slipped underneath of the four-door Charger, it inevitably now powers the Jeep Grand Cherokee Trackhawk.

But contrary to its cousins from Dodge, the Trackhawk is equipped with all-wheel drive, allowing it to sprint from 0 to 100 km/h in only 3.5 seconds, a time that can be compared to some high-end supercars.

Essentially identical to the engine powering both the Challenger and Charger Hellcat, the Trackhawk’s version pumps out 10 horsepower less (707) due to a different exhaust system. It’s the same story for torque which drops from 650 to 645 lb-ft, but the changes are negligible. An eight-speed automatic transmission, supplied by ZF, takes care of sending all that power to the ground.

On top of being powered by a powerful race engine, the Jeep Grand Cherokee Trackhawk comes standard with an upgraded performance suspension, larger Brembo brakes and 295-mm wide staggered tires. But even with all this go-fast hardware, this Jeep keeps intact the useability and practicality of a Jeep Grand Cherokee Trackhawk, meaning it will carry up to five passengers in utmost comfort all while offering the longest standard features list of any model in the range, including enjoyable creature comforts like thick leather seats and an entertainment system for the rear passengers. 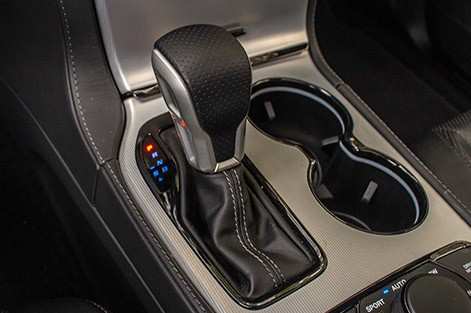 Once the rear seatbacks are lowered flat, the Jeep Grand Cherokee Trackhawk will engulf up to 1,934 liters of your gear, making it one of the most spacious SUV in its class. Towing is also class-leading, at 7,200 pounds (3,400 kg). 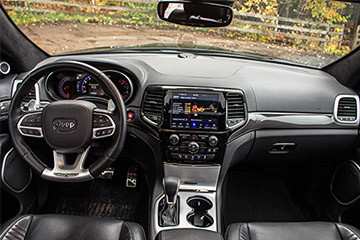 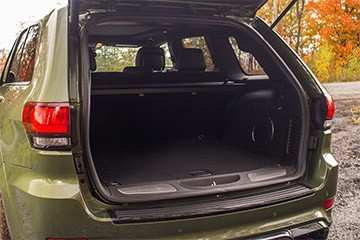 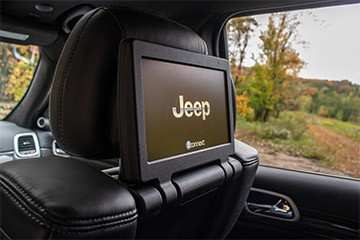 The Jeep Grand Cherokee Trackhawk’s interior doesn’t change much from a standard Grand Cherokee. Except for the subtle carbon fiber dashboard trims and occasional Trackhawk badges, it’s all rather familiar inside. FCA’s Uconnect infotainment interface remains a leader in simplicity and downright ergonomic common sense. For the Jeep Grand Cherokee Trackhawk, the system incorporates the famed Performance Pages menu which allow the driver to configure the vehicle’s driving dynamics to their personal preferences. 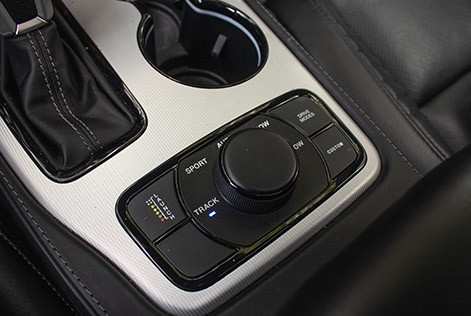 For instance, the Jeep Grand Cherokee Trackhawk’s adjustable dampers can be firmed up or softened, the transmission’s reaction times can be altered and both throttle and steering response can be sharpened independently. Jeep also gives you up to five pre-determined settings, Tow, Snow, Auto, Sport and Track. In Track mode, this Jeep Grand Cherokee Trackhawk removes its traction control system and unlocks launch control.

To nobody’s surprise, it’s the mind-blowing acceleration and diabolical soundtrack from the supercharger’s wine that gives the Jeep Grand Cherokee Trackhawk a unique and very charming personality. Granted, at $115, 545, this top-dog Jeep isn’t exactly cheap, but it offers as much, if not more performance out of the box as some high-end performance SUVs.

It is indeed amusing to harass a BMW X5 M or a Porsche Cayenne Turbo from behind the wheel of a Jeep. As a matter of fact, only a Tesla Model X Performance is tough enough to can take this big guy on in a drag race.

But even if it’s a large and heavy vehicle, the Jeep Grand Cherokee Trackhawk’s handling and levels of grip are rather impressive. While, yes, its performance suspension can prove a little choppy on public roads, but it allows this Jeep to remain well-planted, nimble, and confidence-inspiring at high speeds. Braking is also above average considering how much weight is being carried around.

The automatic gearbox works well, especially in Track mode, as it shuffles through gears at lightening quick speeds, but it did prove somewhat crude at times. It is however easy to forget that you’re driving a 700-horsepower machine. In Auto mode, the Jeep Grand Cherokee Trackhawk remains gentle and impeccably well-mannered. Its fat leather thrones offer plenty of roadtrip-worthy comfort, while the cabin itself is well insulated, letting in only the pleasing sounds of that mental V8 engine.

Like the rest of the SRT bloodline, the Jeep Grand Cherokee Trackhawk comes with both a red and black key. The latter limits the beast to around 500 horsepower, a great feature if you need to lend your vehicle to a less experienced driver. The red key unleashes everything this friendly green giant has in stock.

The king of the hill, the all-time
RULER OF SUVS,

Sure, it’s loud, obnoxious and not particularly fuel efficient, but its undeniable road presence, endearing character and anti-conformist attitude make it one of the most intriguing performance vehicles currently on sale. Keep yours in good shape, and in a few decades, it’ll definitely be worth a healthy sum.